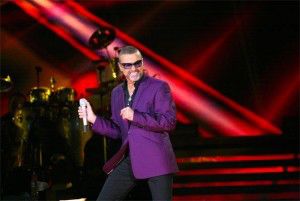 Less than a year ago George Michael was at the brink of death fighting pneumonia, an experience he says has given him a new perspective on his career. And although not fully recovered (the Australian leg of this tour has been cancelled) he took to the stage like a man reborn, striding on to a huge ovation, borne as much out of the audience’s delight to see him, as to a communal sense of relief that he is alive at all. Like Amy Whinehouse, as his new single “White Light” reflects, there was very nearly “one less star in the atmosphere.”

Aptly named the Symphonica tour, with support from the Czech National Symphony Orchestra and at times singing from a bar stool, you could have expected the ghostly image of Frank Sinatra on the screens behind. But this only added to the atmosphere with some outstanding versions, even by his impeccable standards of Father Figure, Cowboys and Angels, and a very emotional You Have Been Loved.

After the break the tempo increased and the fans got to their feet for a trip down memory lane, including Wham favourites I’m Your Man and Freedom. If their was a criticism, it would only be that few people do funk quite as good as George does and the audience would have liked a few more dance tracks.

But still, this was a brilliant night out with a talent we came so close to losing. Hopefully when his recovery is complete, he’ll don the policeman’s uniform one more time and take us “Outside”.