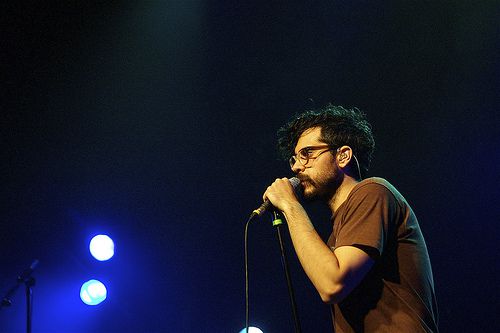 Why? are clearly a band that inspire cultish devotion, for the most part thanks to Wolf’s unique lyrical perspective. For any newcomers, it is as if Woody Allen was born 40 years late and weaned on Vice magazine and hip-hop. It’s certainly a niche that appeals to a wider fan base than might at first seem likely. Tonight Wolf feeds upon the crowd’s enthusiasm, ramping up the energy and proving to be a magnetic, self-effacing focal point. Musically the live manifestation of Why? is a harder, edged more lively beast than their recorded counterpart with Josiah Wolf’s percussive skills coming to the fore.

Although ostensibly a tour to promote new album Mumps, Etc. the crowd were treated to a generous selection of favourites, playing the majority of career highlight Alopecia with A Sky For Shoeing Horses Under, The Hollows, These Few Presidents and Good Friday providing a few of the nights highlights.