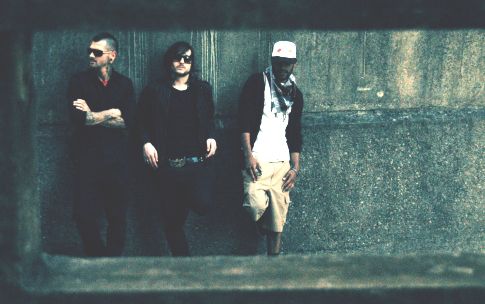 So, Chris, tell us a bit about the origins Bleed Electric: where are you from and how did you start?

Bleed Electric started as a solo side project of mine during studio down days. At the time I owned and ran Screamadelica Studios in Cardiff Bay and before I knew it I had an albums worth of tracks.
Shortly afterwards Silk and Siege came to the studios to record a mix tape with me. After their session and a day or twos thinking I met up with Silk to discuss the idea of getting together and doing something together. Bleed Electric as it exists today is the result of that meeting.

Who are your members and who does what in the band?

The members are Chris “MUG5″ Maguire, Dean “S-Tradamus” aka Silk Fortt and Leon “Siege” Hassan. Initially when we first got together I was doing all of the production and melodic vocals, with Silk and Siege doing the rapping parts but, as we spent more time in the studio and growing as a band all the lines of what we did blurred as far as the genres that we surf. Nowadays we all work on production, we all rap, we all sing. If someone wants to do or try anything they do it.
If someone works on a beat, they show it etc. One of my favourite things about Bleed Electric is the lack of boundaries we work with.

For people who haven’t heard Bleed Electric, how would you describe your sound?

Future fresh. What does that mean exactly? It just means we are doing stuff that will still sound good in years to come. For example, /This Is My Masterpiece/ was recorded, produced and mastered in 2010, a whole two years ago and it sounds just as relevant and current as anything else that has been released in 2012. Our music is written and created for the people with special ears, the people that can look past the surface and pick out all the subtle intricacies that are included in every single Bleed Electric track, realizing the legitimacy of the tracks that lie below its exterior.

What are the main influences on Bleed Electric’s music?

Well everything. I mean, some of our tracks have been mixed with Death Metal and all sorts of everything else. Influences come in the shape of The Beatles, Nirvana, Between The Buried and Me, Kanye West, Eminem, Dr.Dre, NWA, Public Enemy, Lil Wayne and a gazillion others that if named would cause us to be here all day! Our influences are like our music…. genre-less and open to everything.

I understand 2 of your members are in Cardiff and you are in New York. How did that affect the writing and recording process?

Everything we are releasing was done in the largest part two years ago while I still owned and ran Screamadelica Studio in 2012. /This is My Masterpiece/ is the last of the major releases from this. I will be working on a /Z-Sides/ album though that showcases some of the tracks we never ended up releasing, think of it as a bow to wrap up the Bleed Electric of old and to welcome in the Bleed Electric of new. I would expect we will record some new material in 2013. Depending on how it goes you know? Might even see if we can record our follow up in the same studio that is now owned by someone else. That might make for some interesting stuff.

Any plans to tour or play live?

Plans yes. But plans of grandeur. I only want to do it if we can go live band. I have already figured out the logistics of being able to play guitars and bass and having them trigger synths. Same with the drums. Just need players and a shit ton of money so we can all get in the same room and make it happen. When it does eventually happen it will be freaking awesome though, I’ve already visualized it.

What else is in the pipeline for Bleed Electric and for you as an artist?

For Bleed Electric out imminent plans are to release a /Z-Sides/ album early 2013 showcasing all the stuff we never released in the current incarnation of Bleed Electric and then to record a debut album in 2013. My imminent plans are to get back into producing music more… the past two years I have focused on art, design, video and motion graphics A LOT and I am itching to get back into music. Just need to get an NYC studio together and start from there. Watch this space…