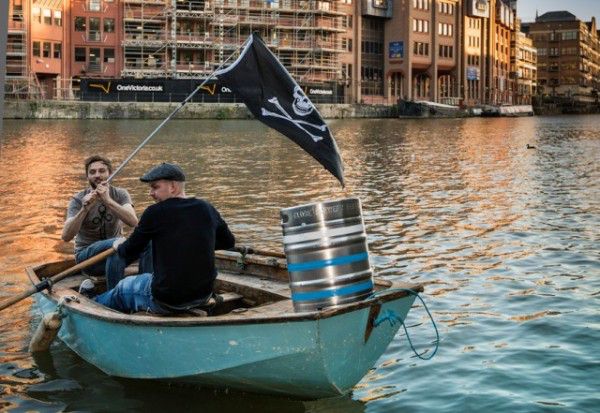 The new branch, on Baldwin Street, is their ninth craft beer bar, opened in response to a ‘groundswell of craft beer fans’.
With a capacity of 90, BrewDog Bristol will not only showcase BrewDog’s own ales, but also draught beers from breweries all over the world, including Mikkeller, Evil Twin, The Kernel, Flying Dog, Rouge and Ballast Point. Cheese and meat platters will be available, with beer pairing advice from well trained bar staff, along with locally sourced scotch eggs and pies.

It was officially opened by BrewDog cofounder James Watt, on October 27, 2012. He gave a nod to Bristol’s buccaneering heritage by arriving at BrewDog Bristol on a makeshift pirate ship. He said: “Bristol has always been a prime target for a BrewDog bar; there has always been a solid community of craft beer fans and we’ve been regularly lobbied by them on our blog to choose Bristol as our next location. We have lit the fuse on a revolution that has already redefined beer in the UK, with Bristol the latest city to embrace mutiny and reject the mainstream mega corporations currently ruling the drinks industry with an iron fist stuffed full of marketing cash.”