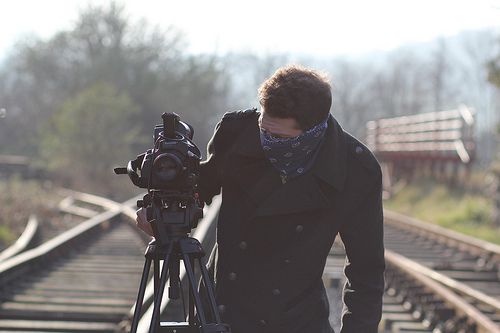 Talented UWE Bristol film graduate Matthew Nesbeth has had his film New With Tags selected for the Aesthetica Short Film Festival (ASFF 2012) being held in York from 8-11 November 2012.

The five minute film will be shown in the Thriller section of the festival. Talking about his film Matthew says, “This film is all about a battle between one’s own selfish logic and moral subconscious. Our protagonist Tom is using his own simplified 12 step programme to help him get away from a situation that is anything but trivial.

“A lot of my inspiration comes from advertising and music video because I love micro short filmmaking where a story has to be executed in a very short period of time. In this instance it was seeing how much content and depth I could fit into five minutes without it becoming a narrative nightmare.

“My team and I are delighted that our film has been selected for a festival such as Aesthetica. Their enthusiasm has made us all the more excited and we hope to save up enough money to travel to York in November. This is a big opportunity for us as amateur practitioners. Filmmakers with next to no budget can often find it a challenge to get their work into festivals. My goal was to create a fast paced montage piece in under 10 minutes. It needed to be something that would dive straight into the story with no drawn out beginnings, middles and ends. Even if you make a film at only 15 minutes long, it’s going to have to be pretty special to get exposure at professional festivals. It’s all about working with your limitations, compromising and being willing to adapt.”

ASFF 2012 uses the historic city of York as a backdrop for the festival, with screenings taking place across 15 different venues, including the Mansion House and 600 year-old Guildhall as well as boutique cinemas in bars and shops across the city.

The films are selected from an open submission call and represent the work of both emerging and established filmmakers, crossing continental and genre boundaries. This year’s festival has a cosmopolitan flavour, screening films from over 25 countries worldwide.

Abigail Davies, Associate Head of Department, Screen and Creative Media at UWE Bristol said, “During his graduation year, Matt proved himself to be an outstanding student by the quality of his creative thought, his dedication to honing his craft skills and the generosity of his collaborative approach.

“Above all, he was determined to make an eye-catching, audience-intriguing ‘little’ short and he achieved this in New with Tags, a stylish, well-crafted film that sets out to tell its story (of a young man running away from his responsibilities) as pithily as possible. Festival selection is a sure sign of success in short film and we are delighted that the quality of Matt’s film has been recognised by this prestigious international festival where student work is up against the very best filmmakers from around the world.”

The festival is now in its second year and has been described by Jay Anderson, Head of Film Culture at Creative England as ‘one of the most exciting new film events to emerge in recent years.’ The organisers say that the standard of this year’s competition has been extremely high, and describe Matt’s selection is a great testament to his talent and the teaching at UWE Bristol.

Matt’s film has also been selected for a couple of other festivals, including the NAHEMI programme at Brief Encounters Short Film Festival.