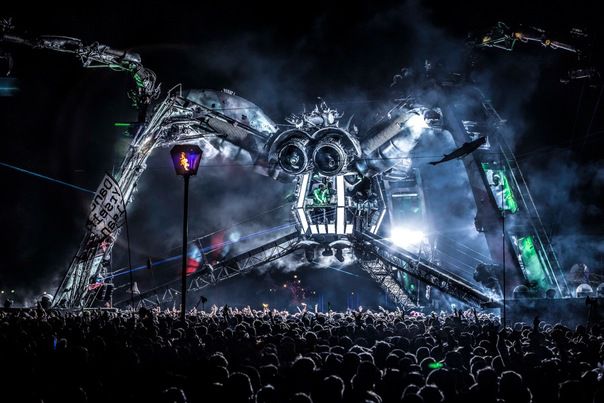 Arcadia may already be plotting their next mission into full spectrum meltdown, but the memory of Glastonbury 2014 is still burned into the collective consciousness.

Having flourished in its new home near The Park, Arcadia saw record numbers of 70,000 turn out on the Saturday night to experience the jaw-dropping Spider in all its fire shooting, laser piercing, alien landing glory. Such was the impact that the BBC’s Glastonbury coverage saw a short behind the scenes documentary on the ethos and construction of Arcadia rack up an impressive number of repeats.

The 50-ton mechanical Spider was an awe-inspiring, architectural beacon of the Glastonbury landscape that could be seen from every corner of the festival. Painstakingly created from recycled military parts, The Spider formed the centre-piece to Arcadia’s Mechanical Playground where Paka, the fire-breathing dragon resided alongside the car crushing Hand of Man, the Pulse Jets, the Lightning Rider, the Fire Tornado, and the mobile Bug stage which opened its wings to reveal a Funktion One sound system for spontaneous, impromptu raves. A defining moment came when an electrical storm prevented the giant metal structure from opening and Mr Scruff commandeered the Bug, driving euphoric crowds through the downpour and into the sunshine.

Arcadia is straight back on the move after Glastonbury, gearing up for a fresh wave of multi sensory mayhem. Next stop is Boomtown Fair 7-10 August, then onto the first landing in Bangkok, Thailand before hitting the amazing Rhythm & Vines Festival in New Zealand, and on into 2015.