247 Magazine’s, Sammie Spungold catches up with UK Hip Hop group Foreign Beggars, backstage at this years 2016 Boomtown Festival and discusses how the UK music scene is changing here and overseas.

Backstage at Boomtown’s notorious hip hop venue Poco Loco I caught up with Ebow ‘Metropolis’ Graham and DJ Nonames, whose name shall remain elusive! After playing for the third time at Boomtown, they closed the stage for the final time on the Sunday night with an amazing performance. “We’ve always got a lot of love for Boomtown,” Ebow says “The crowd has always shown us a lot of love.” This year was no exception, with fans left wanting more as another amazing Boomtown is drawn to a close.

Ebow: “When we started out back in 1996 you’d never really see other Hip Hop groups abroad, or Grime artists even. But the love abroad for the UK music scene has been growing and recently there are so many Grime artists that have carried the flag for UK MCs in general and the UK sound has been exported so much more. Although, I tell you there is one place that’s always had love for UK Hip Hop and that’s Australia, they know where it’s at man!”

DJ Nonames: “A lot of our contemporaries that we started out with, don’t do shows in Europe still but maybe once a year they get to go out to Australia and New Zealand on tour and do their thing over there. Where is in America, let’s be honest, they don’t really want to hear any of our UK hip hop.” “Unless your The Streets, they were bang on them!” Ebow added. “Yeah” said DJ Nonames, “It’s true, they do seem to like our Grime artists though, but let’s face it, not many of them can get visas to go out there and perform can they!”

Ebow: “It’s not the same in return though ay? When I grew up I listened to a lot of Pharoahe Monch, he was my idol bruv. I was all over USA east coast Hip-Hop and stuff man, but when I first heard Task Force back in 1996 that was the first time I started to get into the UK hip hop MC’s. Where I was growing up in the South East London everyone was rapping an American accent, but Task Force, man, when I had that s*** it made me switch up my whole game. It was just f****** mad! Now the scene has just evolved so much and there are so many amazing talented rappers coming out of the UK right now, whether it’s Grime or Hip Hop, I don’t really look at that to me a flow is a flow” Ebow says.

DJ Nonames: ” I tell you what, there are some interesting things happening just below the surface in terms of Grime and Hip Hop. With artists appreciating each other and working together and like Ebow says when we came up through the scene it was a definite division, you were either on the Garage, Grime side of things, or you were on the Hip Hop, sample beat side of the fence, it was two different worlds. Now it’s all come together and it’s lovely to see.”

Ebow: “In the last five years you’ve started to see a lot more collaborations between lot’s of different genres too and a lot more experimentation as well, pulling out all sorts of great music. That’s also one of the great things about the UK in general, there’s so much great music coming out from all over the place, Manchester, Bristol, London, wherever man, even Scotland where you’ve got artists like Hudmo (Hudson Mohawke) and Rustie. Just seeing what all those guys have done, it’s amazing man. It’s great to see that going even further too out of the UK and even feeling a bit of love in the States, with Hudmo producing on Kanye Records and Drake putting UK artists on his album. I feel very privileged to be a part of the scene because there’s just so much amazing Music.”

Foreign Beggars have got two brilliant tracks out at the moment. 100 Standard ft. Ocean Wisdom (produced by Machinedrum and Fracture) with gripping verses from the Beggars and featuring big in the game High Focus’s Ocean Wisdom. For those of you wanting more, you’ve got it, The Bits (produced by ASA and SORROW). This more up tempo track is pure skills and is testament to the fact that after 20 years in the business, Foreign Beggars can still leave you begging for more.

Both tracks are available on Beatport and Bandcamp, more here information here: www.foreignbeggars.com 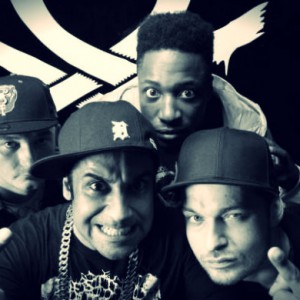